Leucine-Rich Glioma Inactivated protein 1 (LGI1) is a secreted neuronal protein highly expressed in the central nervous system and high amount are found in the hippocampus. Studies have shown that LGI1 plays an essential role during development, but also in neuronal excitability through an action on voltage-gated potassium Kv1.1 channels, and in synaptic transmission by regulating the surface expression of α-amino-3-hydroxy-5-methyl-4-isoxazolepropionic acid receptors (AMPA-R). LGI1 appears to be a major actor of synaptic regulation by modulating trans-synaptically pre- and post-synaptic proteins. In this review, we will focus on LGI1 binding partners, “A Disintegrin And Metalloprotease (ADAM) 22 and 23”, the complex they form at the synapse, and will discuss the effects of LGI1 on neuronal excitability and synaptic transmission in physiological and pathological conditions. Finally, we will highlight new insights regarding N-terminal Leucine-Rich Repeat (LRR) domain and C-terminal Epitempin repeat (EPTP) domain and their potentially distinct role in LGI1 function.

Thereby, studying and understanding the pathologies associated with LGI1 disturbance, are essential to improve diagnosis and treatment for these diseases. For this, it is necessary to investigate the underlying mechanisms regulated by LGI1 and to understand the processes by which LGI1 mutations or Abs disturb these mechanisms. Thus, to better understand how dysfunctions of LGI1 caused by mutations or Abs lead to epileptic seizures and cognitive disorders, cellular and murine models targeting LGI1 have been developed. 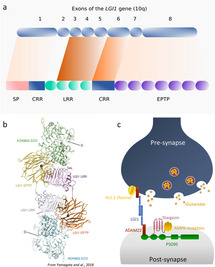