What is a reference center?

A reference center for a rare disease or a group of rare diseases is a set of multidisciplinary hospital skills organized around highly specialized medical teams. A disease is called "rare" when it affects one in 2 000 people, it means that for France, less than 30 000 sick people per pathology.

- Promote the diagnostic of these diseases

- Reduce the delay between the diagnostic and the patient care

- Improve the quality of the patient care

The Reference Center brings together 3 teams, Lyon which is the site coordinator and Paris with Saint-Etienne which are competences centers. A competence center provides care and follow-up for people with rare diseases as close as possible to their home based on an adapted territorial network in connection with the rare disease reference center on which it depends functionally. Each center is asociated with a laboratory ensuring the detection of onco-neuronal antibodies. Each team is also affiliated to a certified research laboratory (UMR INSERM 1217 and 975) and works on specific aspects of the PNS physiopathology. The 3 sites are complementary and allow, thanks to their close collaboration, a wide french coverage serving patients in several regions and the pooling of various skills. Lyon and Paris bring their cancer networks and their competences on central attacks whereas, St-Etienne brings skills on peripheral neuropathies which are extremely frequent during PNS.

The reference center joined the BRAIN TEAM sector in december 2015. This team brings together a group of rare diseases having in common the rare pathologies of the central nervous system in their broadest dimension. Thus, the Brain team combines pathologies with motor or cognitive expression, familial or sporadic in both adults and children.

Achieve the detection of antibodies in connection with the "Laboratoire d'Auto-immunité du Centre Hospitalier Lyon Sud", directed by Dr Nicole Fabien in order to diagnostic Ea and SNP.

Develop a research activity for the identification of new antibodies and the physiopathology study of theses diseases, thanks to the "Synaptopathies et autoanticorps" from the Neuromyogene Institut.

Achieve the detection of the "classical" anitbodies by the "Laboratoire de Neuro-Oncologie Expérimentale" directed by the Pr Delattre at the Pitié Salpêtrière Hospital.

Achieve the detection of the "classical" anitbodies by the immunofluorescence technique on mixed sections of cerebellum and peripheral nerve of monkey following by the verification using immunodot technique.

Creation and managment of a national database called BRAINDYS, at the origin of many scientifc works which allow the improvment of knowledges on AE and PNS.

Identification of new antibodies, development and provision of diagnostic tests for the nationam medical community and scientific.

Development of cellular and animals models in order to understand the mecanisms involved in the neuronal and synaptic dysfunctions characterizing neuropsychiatric diseases and to propose new treatments.

The reference center in figures 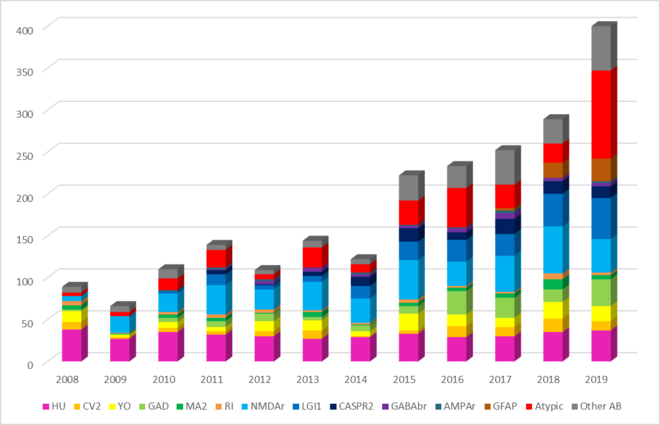 This activity is developed in close collaboration with the CRB of the Lyon neurological hospital "Neurobiotec" and all patients are informed and sign a consent.