CLINICAL AND PROGNOSTIC VALUE OF IMMUNOGENETIC...

Antibodies against leucine-rich glioma-inactivated 1 (LGI1-Abs) characterize a limbic encephalitis (LE) strongly associated with HLA-DRB1*07:01, although some patients lack LGI1-Abs in CSF or do not carry this allele. Whether they represent a different subtype of disease or have different prognoses is unclear.

Retrospective analysis of clinical features, IgG isotypes, and outcome according to LGI1-Ab CSF positivity and DRB1*07:01 in a cohort of anti-LGI1 LE patients 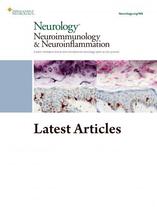